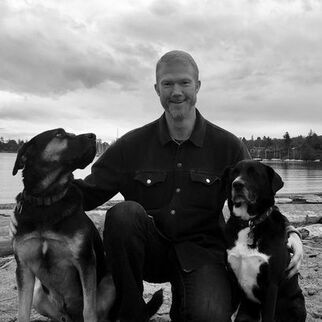 ​Jeff graduated from the Atlantic Veterinary College in 1997 and then continued on to Florida to complete his Veterinary internship. While in Florida Jeff focused on canine behavior and dermatology. Since then Jeff has operated several clinics in Calgary and Airdrie always with a priority of great client service and patient care. He now spends his time between his Calgary clinics as well as his clinics in Victoria. His three rescue pets at home are Cola (Pitbull/Lab Cross), Dexter (Brussels Griffon) & Sheriff (Domestic Longhair Cat). 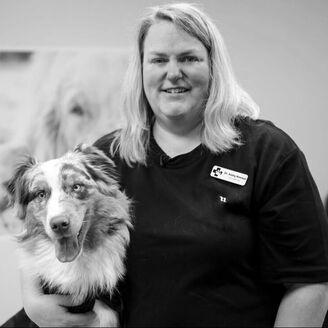 Kathy graduated from WCVM in 2000 and then completed a one year rotating internship in small animal medicine and surgery in West Hartford, CT. Kathy then spent four years in a private practice in Penticton BC. Deciding she wanted to try something a little different, she switched to full time emergency medicine for eight years in Edmonton. As an active competitor in dog sports, particularly agility, obedience and herding, Kathy developed an interest in sports medicine and rehabilitation, completing her certification in rehab through the Canine Rehabilitation Institute. She spent the last 16 months doing full time canine rehabilitation at WCVM as well as learning animal Veterinary Spinal Manipulation Therapy through the Veterinary Chiropractic Learning Centre and acupuncture through the Medical Acupuncture for Veterinarians program. 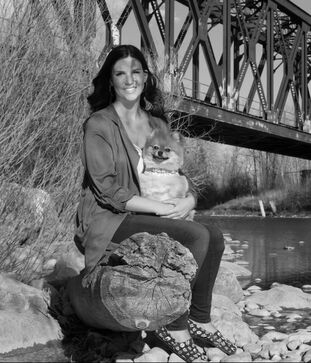 Megan was born and raised in Medicine Hat, Alberta. She had always known from a very young age that she wanted to be a veterinarian and inherited her love of cats from her mom. Megan attended the University of Calgary for her undergrad then obtained her veterinary degree from Oregon State University, where she was a member of the Phi Zeta Veterinary Honour Society. She has a strong interest in Veterinary Oncology and preventative medicine and her favourite part of veterinary medicine is the relationships she builds with owners and their fur babies.

When she is not working, you can find her curled up on the couch with her two Pomeranian's, Lexi and Lola, most likely watching Netflix. She also really enjoys hiking, cycling, yoga and running. Megan is so excited after all these years to finally be back home in Canada and joining the Dand Veterinary family! 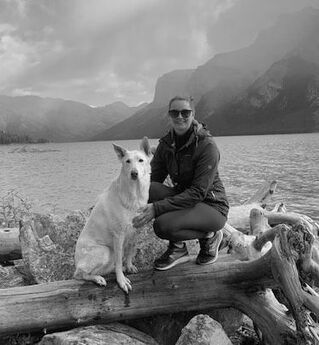 ​Originally from Manitoba, Nicole moved to Alberta several years ago. She grew up loving all animals but had a special passion for horses. Following her passion, she received her diploma in the Animal Health Technology program in 2008. As a new RVT, she worked in a variety of different areas in the veterinary world including small animal, equine, emergency care, and bovine embryo transfer. Working in these different areas allowed her to gain vast knowledge and experience. After moving to Alberta, she was hired on with Dand Veterinary Clinics as an RVT and helped Dr. Dand to bring Springbank Pet Hospital from the ground up. Over the years she has helped with the opening of several clinics including a few on Vancouver Island and soon realized her passion for management as well as the business side of veterinary clinics. She now manages and operates the four Dand clinics in Calgary and is enjoying every moment of it. She currently has two pets, Nim, a little black cat and Phoebe, a rescue white shepherd mix.  ​ 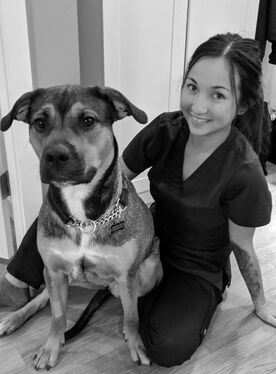 Chloe has known her whole life that she wanted a career working with animals. Starting off at a young age, she spent her time walking neighbor's dogs, and volunteering at the local animal shelter. Her keen interest in caring for animals is what pushed her to get into the vet industry. During high school, Chloe volunteered at local shelters and after some time, attained a kennel attendant/vet assistant role at a vet clinic. Chloe graduated from the Douglas College - Animal Health Technology program in 2016. She worked at various clinics in the greater Vancouver area until May 2018 when she decided to relocate to Vancouver Island. This is where Chloe was first introduced to the Dand Veterinary Clinics.

Chloe and her partner moved to Calgary at the end of 2021 and started working as a RVT at our West Springs location. Over the last couple of years, Chloe has taken a interest in the business aspect of running a veterinary clinic and was interested in advancing to more of a leadership role. We welcomed Chloe as the new hospital manager at the beginning of August 2022 and are excited to help her succeed in this new chapter of her life.

​Kalli started at Dand Veterinary Clinics as a volunteer in 2018. After proving herself to being an overly dedicated volunteer for the summer, Kalli was hired as a receptionist. Through her time as a receptionist Kalli became more involved with the patients and transitioned to a tech assistant role before finally deciding to become an RVT (registered veterinary technologist) herself. In 2021, Kalli graduated from the veterinary technologist program at Douglas College in BC. She now works as an RVT at both our Springbank and West Springs locations. She enjoys all aspects of her job and couldn’t pick a favorite if she tried.
​
At home, Kalli spends her spare time with her border collie mix named Summit (who you can follow with his Instagram tag dummit_the_dog) and a rabbit named Pete (Peter Rabbit). She also enjoys skiing, paddle boarding and spending time with her family in BC. 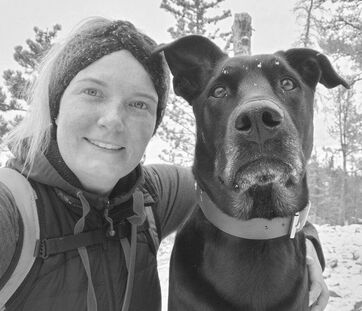 ​Kiia was born in Finland, but has grown up around the world. She went to university in the UK, and graduated with a Bachelor's degree with honors in Veterinary Nursing in 2011. She moved to Calgary in 2012, got registered as a veterinary technologist and started working in a busy 24-hour hospital. Since then, she has worked both in emergency and primary care, and the last few years solely in rehabilitation. She is currently working through her rehab certification through the University of Tennessee, to further develop her skills in rehabilitation..
​
Kiia has two cats, a siamese mix named Tilly and a domestic medium hair named Nicholas. She also has a Shepherd Mix named Brie. Since getting Brie, Kiia has immersed herself in dog behavior and training. Kiia and Brie compete in Barn Hunt, Scent Detection and Rally O. In her free time, you can find her spending time with her fiance, training Brie or camping and hiking in the mountains. Kiia also enjoys photography.

Kiia enjoys all aspects of rehab, but has a soft spot for geriatrics and ensuring they have the best possible quality of life. She also enjoys the challenge of rehabilitation after various surgeries. Kiia is Fear Free certified and tries to use those teachings when handling some of the more nervous patients. 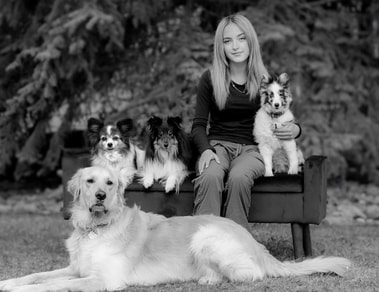 Lauren was born in Calgary, Alberta and has grown up with a love for animals. At the age of 7 Lauren gained a passion for training where she began agility, obedience and movie dog training. Lauren has since stayed an active competitor in agility and has placed in multiple regional and national championships.
Lauren’s desire to learn and pursue rehab started when her sheltie Bolt became injured resulting in temporary paralysis. Through years of rehab which included laser, acupuncture, herbal medicine and rehab exercises Bolt was able to return to his favourite activity, agility.  Lauren wanted to educate herself more about animal health, nutrition and behaviour where she became a certified VTA through olds college as a dual credit program through her high school.  Lauren is beyond excited to work with rehab clients and continue to expand her knowledge of animal rehab.
During Lauren’s free time, she enjoys spending time with her 4 dogs Bolt, Monty, McFly and Doc where she can be found practicing agility, working through her own dogs conditioning routines, doing photography or hiking with her pups. 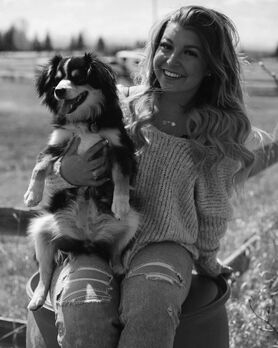 Sage grew up on an acreage near Millarville where her family raised all sorts of animals. She spent many years touring around the country to participate in rodeos, until she decided it was time to focus on a career.  Sage was first introduced to the veterinary industry a couple years ago working as a receptionist. She soon realized that this was the career she wanted to pursue lifelong but was looking to work more closely with the animals. Sage has a keen interest for the wellbeing/health of animals and is excited to join the Rehabilitation team at Springbank . Sage lives with her two pups, Jetta and Gus,  the three of them are nearly inseparable. 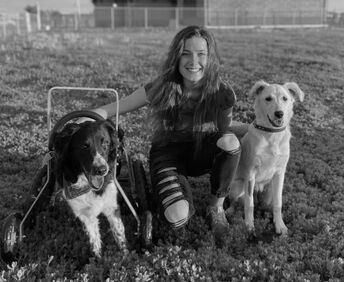 Alex was born in the Netherlands and moved to Calgary when she was 4 years old. She discovered a passion for animals quite young. As a child, her twin sister and her were always catching critters to take care of and gushing over the animals in their lives. After completing high school, she enrolled in the Veterinary Reception/Assistant course at Olds college and loved every minute of it.  It was there that she realized her true passion for rescue and special needs animals. Growing up, family pets were always rescues and this continues to be a passion of hers. Alex felt immediately connected to her first rescue dog Moby, a blind border collie mix who and had a degenerative brain disorder. Alex is  currently a wonderful dog mom to Pippin, a golden retriever mix from rural Alberta. These two have enriched her life, light up her world, and she couldn’t imagine working in any other field.

Adrianna grew up in the beautiful Shuswap area of British Columbia and has always had a love of animals. She was fortunate to study, volunteer, then work at Jandana Ranch. Surrounded by her ranch family and a variety of farm animals, Adrianna had the opportunity to learn and teach Natural Horsemanship as well as absorb other aspects of animal husbandry. This marvelous opportunity further fueled her desire to work in the wonderful world of animals. Adrianna is very compassionate towards both animals and their owners alike and is thrilled to be apart of the Springbank team!

Meagan, born and raised a Calgarian, grew up with a special love for animals and always knew from a young age that she wanted to work with them. She recently graduated from Simon Fraser University in Burnaby, BC, with a Bachelor of Science, major in Biology and minor in Criminology, as well as a Certificate in Forensic Studies. Next, she is hoping to pursue veterinary medicine. Her passion for animal welfare has led her to volunteer with various animal rescue organizations in Calgary and BC, including humane societies and a farm sanctuary. Beyond her volunteer roles, Meagan worked in a small practice in Maple Ridge, BC, where she was able to get involved in all areas of the practice and loved every minute of it! In her free time, Meagan enjoys cooking/baking, painting, being out in the mountains, and curling up on the couch watching Netflix. 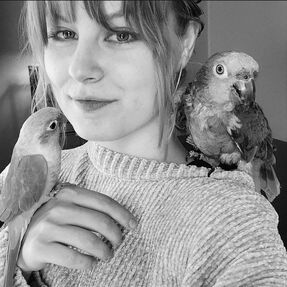 Kristina’s love for animals started at a very young age. When she was just six years old, she convinced her mom to adopt a kitten from a friend’s farm. Shortly after, Kristina’s family welcomed a hamster and adopted a dachshund puppy into the family. While growing up Kristina spent summers with her grandparents, who always had several pets due to her grandmother’s love and compassion for stray animals who needed help. This sparked an early interest in animal welfare. Kristina grew up to love spending most of her time outside meeting critters or at home reading about them. Her current interests are focused in behavior and nutrition; while continuously seeking further education in these fields for domestic and wild animals.
When Kristina is not at the clinic, she can usually be found painting, reading, bird watching, or spending time with my Green Cheek Conure, named Mushu, and Blue Fronted Amazon, named Lulu. ​